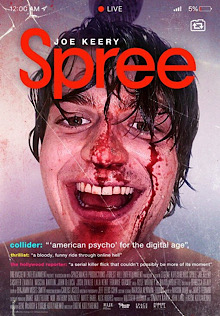 Comedy/horror Spree is distributed in UK cinemas by Vertigo Releasing, following its premiere at the 2020 Sundance Film Festival. Kurt Kunkle (Joe Keery), a driver for Spree (an Uber-like taxi company) has spent years obsessively trying to become a social media star and influencer, yet his viewership of his content has rarely hit double figures. Deciding to do something different that he believes is sure to get a huge following, Kurt puts cameras all around his car and starts to live-stream his day of work with one huge change from usual…he murders his passengers in the live-stream.

American tragedy novel The Great Gatsby was originally published by Charles Scribner’s Sons. Set in the prosperous Long Island of 1922, mysterious multi-millionaire Jay Gatsby spends the summer throwing large parties which seemingly everyone in New York turns up to. When Nick Carraway, Gatsby’s next-door neighbour, starts to get to know Gatsby he is stunned to learn that Gatsby had been lovers with Nick’s cousin, Daisy, a few years earlier, and that Gatsby has been throwing the parties in the hopes that she will turn up and they will reunite. At his request, Nick helps Daisy and Gatsby reunite and their romance begins to rekindle, but the consequences are sure to prove devastating due to the sheer number of people who will be impacted.

American fantasy-drama novella Elevation was originally published by Scribner. Set in the town of Castle Rock, Maine, the novella sees Scott Carey discover that he has a mystery illness which is causing him to lose weight daily, despite not getting physically thinner or changing his diet. With this being a phenomenon that is inexplicable according to science and medicine, Scott is left with no idea what will happen when his weight hits zero, so he decides to do one last significant act – help lesbian couple Deirdre and Missy, with whom he had got off on the wrong foot, be accepted by the small town community who have ostracised them since Day One.

NOTE: in the UK, Ireland, Australia and Israel, A Storm of Swords – the third instalment of the American epic-fantasy A Song of Ice and Fire series – was split into two books, and Steel and Snow is the first part. Apparently us Brits cannot cope with 1100 page long books…what a load of nonsense. 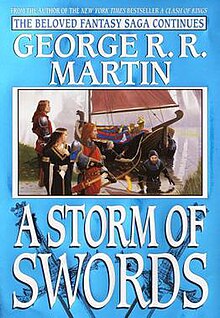 A Storm of Swords: Steel and Snow was published in the UK by Voyager Books. The Seven Kingdoms of Westeros remain locked into the War of the Five Kings but, after so much battle, the respective forces of Houses Stark, Lannister and Baratheon have each suffered heavy losses. Overseas, however, Daenerys Targaryen uses her power as the mother of dragons to grow her forces as she continues to plot to take the Iron Throne. Meanwhile, the Seven Kingdoms face another threat as the wildlings (led by Mance Rayder) approach the Wall, intent on invasion. 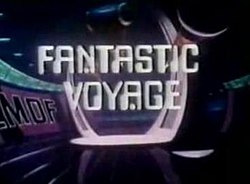 American science-fiction cartoon series Fantastic Voyage originally aired for 17 episodes on ABC, and was inspired by the 1966 film of the same title. Combined Miniature Defense Force (or C.M.D.F. for short) has four field members – Commander Jonathan Kidd (Ted Knight), biologist Erica Lane (Jane Webb), scientist and pilot Busby Birdwell (Marvin Miller), and “master of mysterious powers” Guru (also Miller). C.M.D.F. is a secret government organisation that shrinks down the four field members and their ship The Voyager to microscopic size so that they can solve mysteries and stop crimes undetected in ways which could not be done otherwise. But, they only have twelve hours before they grow back to their normal sizes.

The Angry Birds Movie 2 is a feature length computer-animation from Sony Pictures Animation. When Zeta (Leslie Jones) and her forces at Eagle Island start targeting Bird Island and Pig Island with the intention to destroy them, the Birds and the Pigs call a truce on their ongoing prank war in order to work together to stop her and save their homes.

Based on Simon Rich’s short story Sell Out, comedy-drama An American Pickle is distributed in the USA by streaming service HBO Max, and in UK cinemas by Warner Bros. Not long after emigrating to New York in 1919, a chance workplace accident causes Herschel Greenbaum (Seth Rogen) to be preserved in a vat of pickle brine. Awakening a century later, he meets his only surviving descendant – great-grandson Ben (also Rogen). After his initial struggles to adapt to the modern world get himself and Ben into trouble with the authorities, Herschel becomes determined to prove that he can make himself a success, so begins his own pickle business. The business really takes off, but in the social media age it is only a matter of time before Herschel’s outdated views and opinionated streak have serious repercussions.

American drama series Prison Break originally ran for 81 episodes airing from 2005-2009 on Fox, before returning for a 9-episode-long Revival in 2017. When Lincoln Burrows (Dominic Purcell) is put on Death Row at Fox River Penitentiary for a murder that he did not commit, his younger brother Michael Scofield (Wentworth Miller) gets himself incarcerated there too. Why? Because he has studied the prison’s blueprints and even had them tattooed on himself, in order to break Michael out. As the two brothers, along with several fellow inmates whom they befriend, work against the clock to ensure their freedom, they are soon to learn that those who framed Lincoln work for The Company, a covert organisation whose power and corruption extends all the way to The White House, and they will do anything to ensure that Lincoln is executed.

American cartoon series House of Mouse ran for 52 episodes, and (as you can probably guess from the title) is a Disney series. The titular House of Mouse is a dinner theatre club in ToonTown, run by Mickey (Wayne Allwine), Donald (Tony Anselmo) and Goofy (Bill Farmer), which provide a variety of entertainment and play older cartoon shorts to the characters of Disney’s animated properties. Things rarely go smoothly in the running of the club, however, not least because Pete (Jim Cummings) is constantly trying to get them shut down.

NOTE: while the series continues to this day as Thomas & Friends, the series during its original runs of the 1980s and 1990s was very different to that which has been ongoing since the 2002 revival, partly because of the different title, but mainly because the earlier series drew far more from Reverend W. Awdry’s original children’s books. Plus, I may be slightly biased to those of the 1980s and 1990s due to them being a big part of my childhood television viewing.

British children’s television series Thomas the Tank Engine & Friends is based on the Reverend W. Awdry’s children’s book series, was created with a mixture of model railway figures and stop-motion animation and originally aired on the ITV network for 130 episodes. Set on the fictional Island of Sodor, the titular Thomas the Tank Engine is just one of a number of sentient trains working on The Fat Controller’s railway. While the engines work hard, they also like to have fun and (often through no fault of their own) mishaps and adventures ensue. However, they will always do their utmost to prove that they are really useful engines.