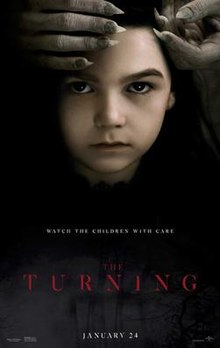 Following its premiere at the 2020 Los Angeles Film Festival, supernatural horror The Turning is distributed in cinemas by Universal. A loose adaptation of the horror novella The Turn of the Screw, the film follows Kate Mandell (Mackenzie Davis) as she becomes a live-in tutor on the Fairchild Estate. Although young Flora Fairchild (Brooklynn Prince) is generally a delight, there is something creepy about her older brother Miles (Finn Wolfhard). However, a number of seemingly supernatural little things add up to give Kate reason to believe that the enormous house is haunted by a presence that poses a threat to both herself and the children.